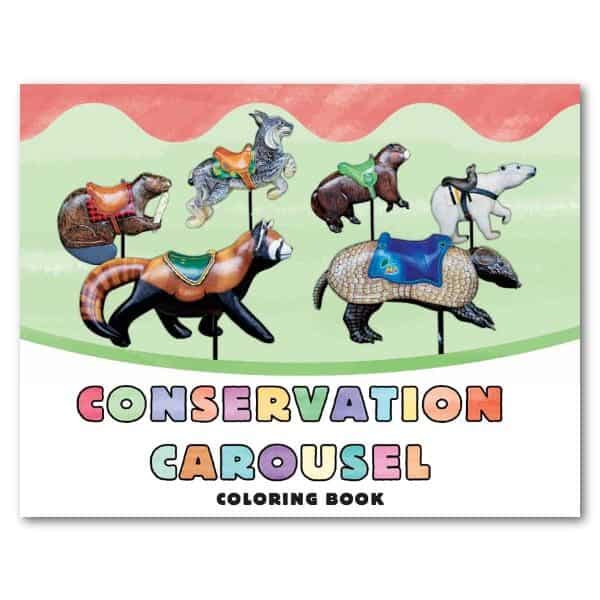 Get one of our NEW! Carousel Colouring Books and help support the Carousel Conservation Campaign! This 32-page colouring & activity book celebrates the beloved carousel at the Edmonton Valley Zoo and the animals that make up the carousel seats. Each page contains original animal artwork for your child to colour, along with fun facts about that animal, and it’s status in the wild, making this book both fun and educational!

The History of the Allen Herschell Kiddie Merry-Go-Rounds

Allan Herschell formed his first company in 1872. He produced his first carousel in 1883. After a very productive life in the amusement ride business, he retired in 1911. He came out of retirement and formed the Allan Herschell Company with partners John Wendler and Ferdinand W. Fritchie in 1915. In the early 1920’s, he developed a merry-go-round that was on a smaller scale and built for children. Prior to this, the carousel or merry-go-round was considered an adult ride. The animals on the adult rides were hand carved of wood. The animals on this smaller machine were made of cast aluminum, two halves that were welded together. The decoration on the machine was very similar to the adult size rides. Mr. Herschell died in 1927. As the company progressed under the leadership of John Wendler and his son William, many more child size rides were developed. They promoted the idea of a “Kiddie Land” where all the rides would be for children – Kiddie Merry-go-round, Kiddie Boats, Kiddie Pony Carts, Kiddie Automobile rides, Helicopter rides, Kiddie Rollercoasters, etc. By the 1940’s and forward, the decoration on the machines was switched to an art deco style. Skilled carvers became scarce, materials and lighting changed, and production demands resulted in a change in product. The company was in existence until 1970, producing more than 68 different rides for children and adults. The ca.1959 Kiddie Merry-goround in Edmonton had this new look. Twenty aluminum horses, two chariots and art deco decoration. The American National Carousel Association (NCA) www.carousels.org, takes a census of all operating antique carousels in North America. In their most recent census, the NCA lists only 7 Allan Herschell Kiddie Merry-go-rounds in operation.*

Conservation of an antique often involves removing years of grime but maintaining the existing components in their existing condition; while Restoration often entails maintaining the antique using original components and restoring decoration to the condition of original manufacture. Conservation of the existing carousel was discounted as impractical since few of the original components other than some of the structural steel and the 20 horses are truly original. Restoration of the existing carousel was discounted as impractical as it would entail using original components which are either no longer available or would be very difficult to maintain on an ongoing basis. Refurbishment was selected as unavailable and/or high maintenance components of the drive system and structure will be replaced with modern and highly reliable components that will provide decades more life with lower maintenance and higher reliability. At the same time, replacing the old cast aluminum horses, two “chariots” (bench seats) and decorative panels with wildlife images and wood carvings will help to support the Edmonton Valley Zoo’s mandate to Educate and Conserve. There are more new animals carved from basswood for the carousel than can be used at any one time but this will allow for timely maintenance and variety on the carousel. The old cast aluminum horses will be carefully and lovingly restored to their 1959 motifs and used as decoration to enhance the interior of the new carousel building.

Follow the link below to learn more about the Carousel Project, including status updates, images of our new carousel seats, the Global News interview about the Project, as well as how you can sponsor a seat of your own!